Eighty years ago today, a comic book hit the newsstands. It cost ten cents, and the vast majority of people who purchased it — as most people did in 1938 — read the book once and then threw it away. Those people who didn’t, if they still happen to have the book and it’s in decent condition, are sitting on a fortune. That book changed everything. It invented a genre, it left an indelible mark across popular culture, and it gave this woeful world a hero that has left a mark on everything we know.

April 18, 1938, was the day Action Comics #1 was released to the world. It was the day Jerry Siegel and Joe Shuster gave us Superman.

Today — thanks to a little creativity with the release schedule, DC Comics is releasing Action Comics #1000, the first superhero comic book ever to hit that milestone number. I could spend hours waxing on about the importance of that character, of that book, regaling you with the hundreds of amazing writers and artists who have crafted tales of the man of steel over the last 80 years. But there are plenty of other people writing about that today, many of them far more qualified than I. Instead, let me tell you why Action Comics and Superman matter to me.

Superman is considered the first superhero. Clearly, there are earlier characters that include many of the tropes of the genre (Philip Wylie’s Gladiator, Zorro, the Scarlet Pimpernel, and so forth), but Superman was the character that codified everything we think of when we think of the word: the costume, the powers, the secret identity, the tireless crusade against evil. And although there were many, many imitators, for a very long time Superman was the most popular of them all. Things changed during the “Marvel Age” of the 1960s, when characters like Spider-Man and the X-Men gained traction and became the choice of the sophisticated comic book aficionado. And to be fair, those characters had faults and flaws that made them more realistic and more relatable than a lot of the heroes that had existed before then, the Superman of the time included. 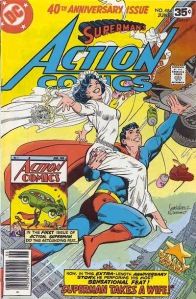 Over the years, there have been attempts every so often to “reinvent” Superman. Some of them have been very successful, some have not. As such, many people complain that the character is “boring” or “too powerful” or “old fashioned,” as if there’s anything wrong with that last one. This results in further reinventions that don’t work, because people lean too hard in the other direction, making a character that loses contact with his humanity. Whenever I hear a writer wants to focus on the fact that Superman is an alien, it makes me nervous, because that’s not what he’s about. 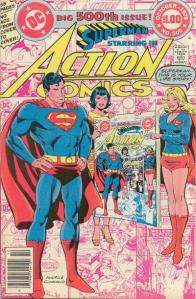 hat makes Superman so great is that — despite the fact that he was born on another planet — he is the most human hero of them all. His power comes from Krypton, but his soul was forged in the farmland of Kansas, brought up by two good, kind people to be a good, kind person. With his power, Superman could take over the world. Instead, he chooses to defend it. This sounds a little trite, but in truth, it’s the most important thing about the character. Who among us, if given any super power, would never succumb to the urge to use it selfishly, even just a little? If given the power to crush diamonds out of coal, wouldn’t you be living in a mansion? If you could could move faster than the eye could see, might not an errant pitch just happen to go the right way for your favorite baseball team? If you had heat vision, how many jerks who cut people off in traffic would find their tires suddenly melted?

The point is, Superman could do all these things, but doesn’t. More to the point, he chooses not to. It’s not that he never feels the temptation, it’s that he knows he can’t give into it. That’s the kind of strength that makes the character fascinating. That’s the kind of thing that he got from the Kansas farmland. The greatest stroke of luck the citizens of the DC Universe ever had is that Kal-El’s spaceship landed on the property of Jonathan and Martha Kent.

A few years ago, DC pulled back from the hero they’d had and made him younger, nullified his marriage to Lois Lane, and tried to “update” him again. A few years later they realized the error of their ways. Now, not only are Superman and Lois married, but they have a son: Jon Kent, Superboy. In nearly 30 years of reading Superman comic books, nothing has made me happier than the adventures of Super-dad and his boy. And a great deal of that probably has to do with the fact that, a little over a year after this became DC canon, I became a dad myself. Superman has always been the man I wish I could be. Now, when I read Action Comics, I see the father — besides my own — that I aspire to be the most. 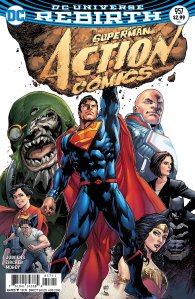 That, you see, is what Superman is. One of the “updates” that seems to have stuck is the idea that his symbol, the “S-shield,” is actually the Kryptonian symbol for the word “hope.” This couldn’t be more appropriate. In the world of the comics, movies, and TV shows, that symbol means that you don’t need to be afraid: no matter what is happening Superman (or sometimes Supergirl, or Superboy, or if the writers are really feeling playful, Krypto the Super-Dog) is there to save the day. In our world, the world that needs a hero so desperately, it’s a reminder of an ideal. Superman is about having inner strength to do the right thing, to protect people who need it, to shine a light of hope where none exists.

It can be a hard thing, sometimes.

But 1000 issues later, I feel as if we need that symbol more than ever.