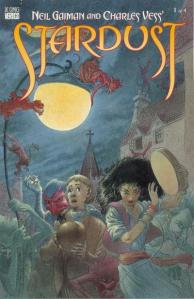 There’s one last comic book movie closing out the summer, friends, and so this week Chase and Blake turn their focus on Stardust writer Neil Gaiman. Listen as the guys discuss their favorite Gaiman stories, both in comics and prose, as Chase continues to confuse “the Dream King” with Gaiman himself, and as Blake explains what’s really good about his work once you get past the pretentious goths who have attempted to co-opt it as their own. For this week’s picks, Blake brings us Doug TenNapel‘s Black Cherry, and Chase cheats and slips in two — Tek Jansen and Star Trek: Year Four.