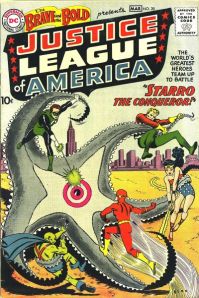 It’s time for our intrepid geeks to talk about the premiere superhero team of the DC Universe, the greatest team of all time, the Justice League of America! Blake, Chase and guest-geek Mike Bellamy delve into their favorite stories featuring every incarnation of the Justice League, they discuss the current comic book, and they shudder at the thought of the in-development Justice League movie. In the picks this week, Blake is all about the Justice Society of America #11, while Chase goes out a limb and talks about All Star Batman and Robin, the Boy Wonder #8.