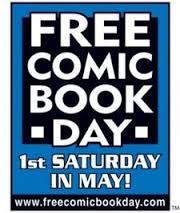 It’s part two of our Free Comic Book Day coverage! Chase and Blake return to the floor at BSI Comics where they talk to Marcus DiGesu and Anthony Figaro, the creators behind Lightning Age Studios‘ upcoming Justice City Chronicles graphic novel and the Leonidas: Rise of the King miniseries. After chatting with the customers and making their picks of the week (including DC Universe #0 from BSI’s Jason, Wolverine: First Class #2 from Chase and Action Comics #864 from Blake), we talk with Doug Raymond and Monty from Welcome to Border City. Kathleen Ledet and Jen Suran tell us about their documentary film Weeding By Example, and Robby Musso — artist of multiple IDW TransFormers comics and Speed Racer: Chronicles of the Racer, sits down for a long-awaited interview. Oh — and because it’s us, we go out talking about Lost.