In Three Wishes, I choose a topic and pick three (often pie-in-the-sky) dreams I’d like to see become a reality. Most of these will never see the light of day, but in a perfect world, they would.

I recently finished a re-read of Jeff Smith’s series Bone, a comic I dearly loved when it was published originally in the 90s and early 00s, and one that I’m happy to report still holds up marvelously. For the first few issues (or chapters, for those who read it in collected editions), it seems as though this comic will be a sweet, funny tale about three cartoonish characters driven out of their home and forced to make a new one in a strange valley with bizarre creatures. The tone shifts rapidly, though, and it soon becomes clear that Bone is really an epic fantasy series, full of adventure and mysticism that shares more DNA with the likes of Lord of the Rings than Garfield.

The final issue of Bone was published in 2004, but despite that fact, it may be more popular today than ever before. Thanks to a well-structured partnership with Scholastic Publishing, an entire generation of young readers has grown up with the three cousins from Boneville in the 12 years since the series was completed. At the time the book was still in production, there was often discussion of a Bone movie, and Nickelodeon even expressed interest in the project. However, it became clear to Smith that they had no idea what the property really was when they wanted to give Fone Bone a pair of magic gloves and a soundtrack by N’Sync, and he eventually killed the deal. The most recent information I could find says that Warner Bros held the film rights as of 2012, but nothing has really been done with them and I don’t know if they even still hold Bone in their stable.

Regardless, the more I thought about it, the less I think a Bone movie would be a good idea. I really think the better home for this incredible story would be on television. The TV landscape has undergone a seismic change since Bone finished its run. In fact, the change began even earlier, in the 90s, with shows like Twin Peaks (the more famous example) and Babylon 5 (the more successful example) showing that TV was an excellent medium for longform storytelling. Whereas most shows were episodic, telling one story each week that often brought no lasting change to the main characters or the status quo of the series, these shows were willing to experiment with a single extended story that had its own beginning, middle, and end. The same year that Bone’s final issue was published, ABC launched a TV show with a similarly simple title: LOST. It became a breakout hit and since then, serialized stories have become commonplace. In fact, two of the biggest shows on TV today are serialized adaptations of genre properties: Game of Thrones and The Walking Dead.

A Bone TV show would be the best way to explore the rich world Jeff Smith created in his 55 issues (and assorted specials and spin-offs), allowing the audience to learn the whole story in its beautiful complexity instead of truncating it to the measly 90 minutes it would likely get on the big screen. The show would, of course, have to be animated – you simply can’t capture the charm of the Bone cousins in live action and having CGI avatars of them interacting with real humans would, frankly, look silly. But how do you sell a TV network on a fantasy cartoon series with a predetermined end date?

As a platform, Netflix has proven itself to be a good fit for more unorthodox properties that would have struggled to find a network home (Stranger Things being the most recent hit example). They’re also no strangers to comic book content, with six different Marvel series in various stages of production. In addition, Netflix has a long-standing partnership with Dreamworks Animation which, okay, is responsible for a lot of bleah shows based on their movies, but also gave us the amazing reboot of Voltron. I feel confident that, with the right show runner, Bone could be another Netflix hit.

Another thing that has severely shaken up TV over the past decade is the influx of superhero programming. In the past, there were rarely more than one or two comic book-based shows at a time, and only a handful of those lasted longer than a few seasons. Now, though, superheroes are everywhere on the tube. Aside from the aforementioned Netflix shows, Marvel has Agents of SHIELD and the late, lamented Peggy Carter on ABC, a Cloak and Dagger series coming to Freeform, and Runaways was recently announced as a Hulu series. Fox has Gotham and has recently begun development of a Black Lightning series, and the CW has DC superhero shows that are all part of the same shared continuity four nights a week! If I could tell my ten-year-old self the sort of stuff I’d have on my DVR one day, he would first ask me what a DVR is, then proceed to crap his pants. 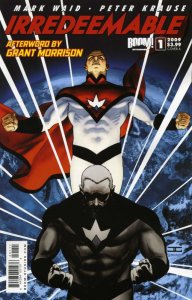 But you’ll notice this superhero content is almost exclusively DC and Marvel. There’s nothing wrong with mining those universes for content, but there’s got to be room for some variety. So combining this with TV’s love for serial stories, I’d love to see Mark Waid and Peter Krause’s Irredeemable make it to the screen. Originally published by BOOM! Studios, this series explores a world where the most powerful superhero of them all, the Plutonian, is driven mad and turns against the world. Although many of the themes would later show up in the better-known Injustice: Gods Among Us, Irredeemable not only did it first, but it goes to even darker places. Also, since it isn’t dependent on using the existing DC superheroes, Waid had the freedom to twist his characters in ways even Injustice wouldn’t dare to do. And finally, unlike Injustice – which will keep on going as long as the video game series it’s based on is profitable – Irredeemable had a solid ending that managed to finish with an air of hope despite the harsh world in which it was incubated. To be honest, the ending is probably the biggest strike against bringing Irredeemable to television. While it works very well in comics, there’s a strong metafictional aspect to it that may be difficult to pull off on the screen. But damn, I’d love to watch them try.

As superheroes have risen to TV prominence, there’s one other formerly-shunned format that has risen in popularity: the anthology. After FX’s popular American Horror Story began its second season by starting an entirely new story with only the faintest connective tissue to season one, there have been several popular shows that attempt the same format. Viewers now accept shows where the ongoing threads are thematic instead of following the same characters or plot, something that hasn’t been popular since the heyday of The Twilight Zone or Alfred Hitchcock Presents. (There have been a few popular anthologies since then – Tales From the Crypt, for example – but they’ve been pretty rare.

Anthology series allow for the same sort of storytelling as a serialized show, but on a smaller scale and with the chance to refresh and try something different each episode or each season. I can think of no comic book I’d like to see in this format more than Kurt Busiek’s Astro City.

Astro City, if you have somehow never read it, is a series about a superhero universe that includes pretty much all of the tropes of superhero comics, but with twists. Samaritan (the Superman analogue) is terribly lonely and wants nothing more than to fly uninterrupted. The First Family (think about the initials) is made up of old Doc Savage-style science heroes and their superpowered children and grandchildren. The city’s Darkest Knight, the Confessor, is a Catholic priest who happens to be a vampire. And the thing is, none of these characters ever take the spotlight full-time. For most of its life over the past 20 years, Astro City stories have usually been one- or two-issue affairs, with a few rare six-issue tales. The longest story to date “The Dark Age,” ran for 16 issues. Even that, though, was broken up into a quartet of four-issue “Acts” with other short stories in-between.

The stories bounce around in time, shift the focus from heroes to villains to henchmen to bystanders, and constantly reinvent the comic over and over again, a perfect format for anthology television. Imagine a season of TV based on “Confession” or “Tarnished Angel,” occasionally punctuated by one-off episodes featuring the likes of Samaritan and Winged Victory’s first date, or the hauntingly beautiful “The Nearness of You.” You can do adventure, comedy, romance, and horror all in the same series. The only constant is the city itself.

TV isn’t what it once was, but I think that, on the whole, we’re getting some of the best shows ever made right now. These three comics would make a welcome addition to an already-rich landscape.