It’s that time again — Blake and Kenny sit down and go through all the big geek news of 2013 — hit movies, comic controversies, and the creators who left us. Plus, we give our picks and yours for the best of 2013! 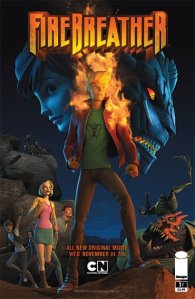 Our talks from the panel room of the Nola Comic-con continue! This week, it’s time to talk to comic book artist Andy Kuhn, co-creator of the Image Comic and Cartoon Network original movie Firebreather! Andy talks about creating the character, the transition to film, and some plans for the future of Firebreather in this Showcase special. In the picks, Blake recommends Green Lantern: Emerald Warriors #10! Contact us with comments, suggestions, or anything else at Showcase@CXPulp.com!

Our 80s Cartoons episode was a hit, and we’re not above repeating our success. This week, the boys talk about their favorite cartoons from the long-ago days of the 1990s, from the Batman and Superman animated series to the battles of the Beast Wars. Join the guys as they debate whether the Marvel cartoons were a cohesive universe, the pros and cons of Nicktoons and Cartoon Network originals, and whether it’s called the Diniverse or Earth-Timm! In the picks, Blake chooses Secret Six #7, Chase liked Gotham Gazette: Batman Dead?, and Mike can’t wait for Spider-Man 2099 Vol. 1!